The reason the previous post, while Jan 23 is typed in by me, is dated January 24th is because it was after midnight by the time I post processed and finally posted the entry.
On the same technicality I'm posting another photo from the same batch for January 24...ok, cheating. lol. And now I've still missed 1/25 because as I edit this, it's after midnight making it the 26th. Surely I'm making a bigger deal of the dates than they really are. 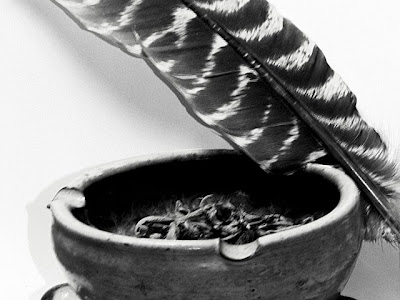 Today I went to WalMart and got some picture frames...one to frame a pic my friend sent me of herself and her daughter, and a couple more because they were a good price. I have been wanting for a long time to rip down the wallpaper in here, paint the walls a solid color, probably white, and hang framed photos around. Ooo, I know what my next photo's going to be. Then I went to Dick's Sporting Goods, looked at camping gear, canoes and bicycles. So much stuff I need, I really need to start playing the lottery. I was going to go to Circuit City next and see how the big clearance is going, but with no money I figured I'd depress myself. I'm already pissed off that they're closing - they're one of my favorite stores.
on January 24, 2009 No comments:

At the end of a day, or any time really, when I need to relax, cleanse any negativity from myself or the room I'm in, or just feel like smelling it, I toss some sage and sometimes cedar into the "pot" and fire it up. Sometimes I feel a negativity in my bedroom and can't fall asleep, and burning some sage really helps...I fall asleep soon after making sure the "fire" is out.
I don't lean a feather on the side of the bowl. lol. That's just for the the picture. I do fan it with the feather but have you ever tried fanning a sage pot and taking a picture of it at the same time?
I grow my own sage and I gather the cedar from broken branches I find alongside the Cape Cod Canal. 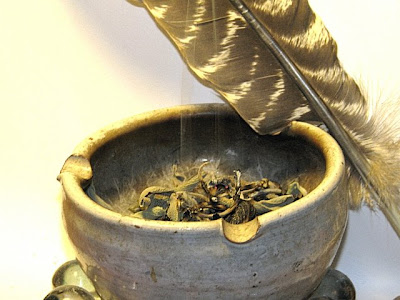 As taken by the FujiFilm, since I've already posted a pic of that. On the left is the one I recently bought (used) - a Canon EOS Rebel G 35mm. On the right is my Canon PowerShot (digital) I've had for almost a year. In the front, between the two, is my LG camera phone. 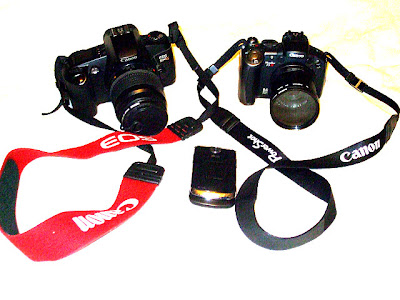 Yes another tree photo, but lookie the bird of prey sittin' up there. I tried to get some more zoomed pics of it but without a tripod it was just biggus blurrius. But this is composed well with the tree I think.
This pic is cropped - the original has more blue sky above the tree and a little more left and right space. Without cropping, the photo still looks very sweet in my opinion.
*pats self on back* 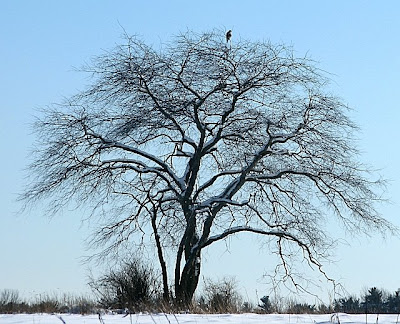 Unfortunately I forgot what I had planned for Tuesday the 20th and I don't see a picture I took for that day. This is another one from the 19th. Can I get partial credit? I took a lot of pictures that day and I had this blog in mind almost the whole time. :) 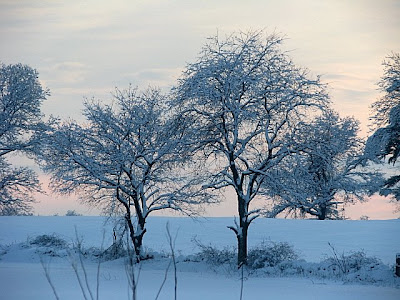 Today after shoveling the driveway, and then shoveling the end again after the sidewalk plow came through (this was an accomplishment for me with my bad lungs, btw. I was proud of myself), I went out to take pictures.
Usually when there's snow, I'm in the house. But you couldn't look out the window at this and NOT want to photograph it. Not that the pic here is outside my window, but just the snow in general, clinging to the branches, etc. It was very pretty. Don't misunderstand...I still don't love snow...I'd rather live in a warm climate and look at pictures of it. lol. 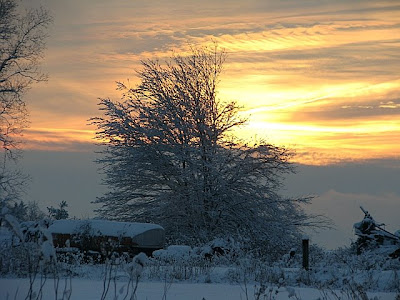 Thanks to Eric's and Ryan's help, the cars and driveway were cleared. Unfortunately a couple hours later we got another 5 - 6 inches of snow. 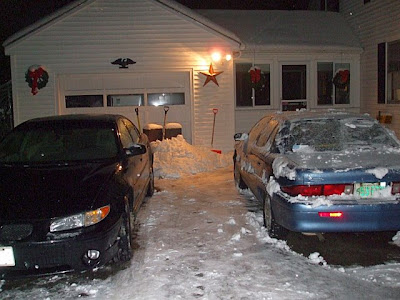